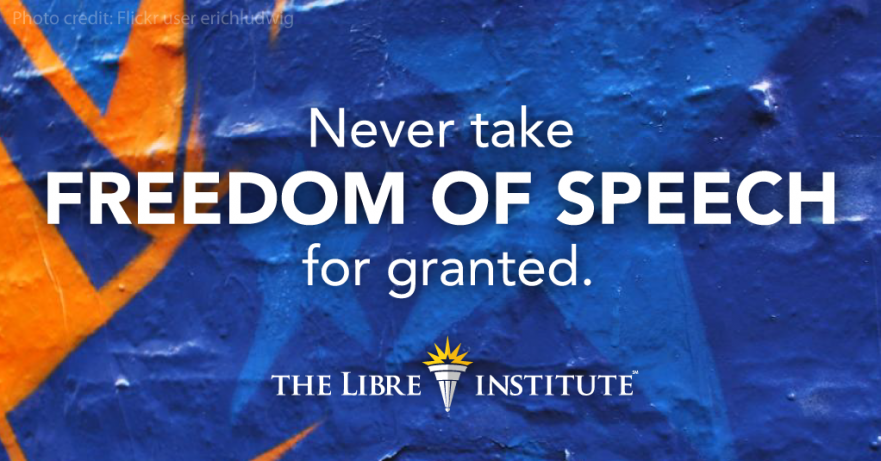 Free speech is not a right the Cuban people have. Given the repressive nature of the island’s totalitarian regime, many Cubans have grown to develop “un policia en la cabeza” – even in the intimacy of their own minds, many on the island are afraid to think of dissenting opinions.

Danilo Maldonado, better known as “El Sexto,” is a Cuban graffiti artist who has been using art with remarkable ingenuity and creativity to challenge the Cuban state – all the while promoting freedom of expression in a society where no such freedom exists. Today, Danilo is once again a prisoner of conscience of the Cuban dictatorship. Only hours after the passing of Fidel Castro he was thrown in jail for making a graffiti that read “se fue” (he is gone), and posting this video on his Facebook profile. The government, however, formally accuses him of “damaging public property.”

His mother, Maria Victoria Machado, revealed that he was beaten by security officials at Guanabacoa Police Station, who have also slipped drugs into his food so he would stop yelling “Abajo Fidel, Abajo Raúl.”

Last week, “El Sexto” was transferred to another Prison in Havana where he will remain in custody while he is “under investigation.” Although at this point it is rather clear that his detention has little to do with his graffiti in itself, and everything to do with his expression of dissent.

After the passing of Fidel, the Cuban official media reported that there were few people on the streets because they were mourning, while the reality, as described by blogger and freedom activist Yoani Sanchez, is that there was “fear, lots of fear” in the Cuban people. No public manifestation that deviates from the official narrative would be tolerated in Cuba, and today Danilo is in jail for giving voice to millions of Cubans that are too frightened to raise their own.

One of the officials in prison told him: “You were the only one who manifested in favor of the death of the Comandante.”

For “El Sexto,” art is liberty, and being behind bars has never stopped him from protesting the misfortunes and brutal repression endured by the Cuban people through his art.  In the United States, freedom of expression is one of the founding principles of our society, and we should draw inspiration from the character and courage of people like Danilo, who fight every day against tyranny.

By raising his voice, the world can unequivocally look into the eyes of the allegedly “progressive” Castro regime, which won’t allow their citizens any kind of dissent. Yet even on this side of the straits, freedom of speech is under attack. The government is using private information on its citizens to try to silence those who speak out, and a culture of censorship in the media has stifled the free exchange of information and ideas. Cubans know what it is like to suffer under a government that does not afford its citizens the freedom to disagree, and Americans should pay attention. Our Constitution recognizes the fundamental right of people to speak freely, without fear of government reprisals. Our Founding Fathers recognized that speech which might offend the majority and lead to government repression was most in need of protection.  The people of Cuba do not enjoy from this freedom.

In the streets of Havana, Cubans can glimpse what freedom looks like through the graffiti of “El Sexto.” The American people could learn a lot from heroes like him.