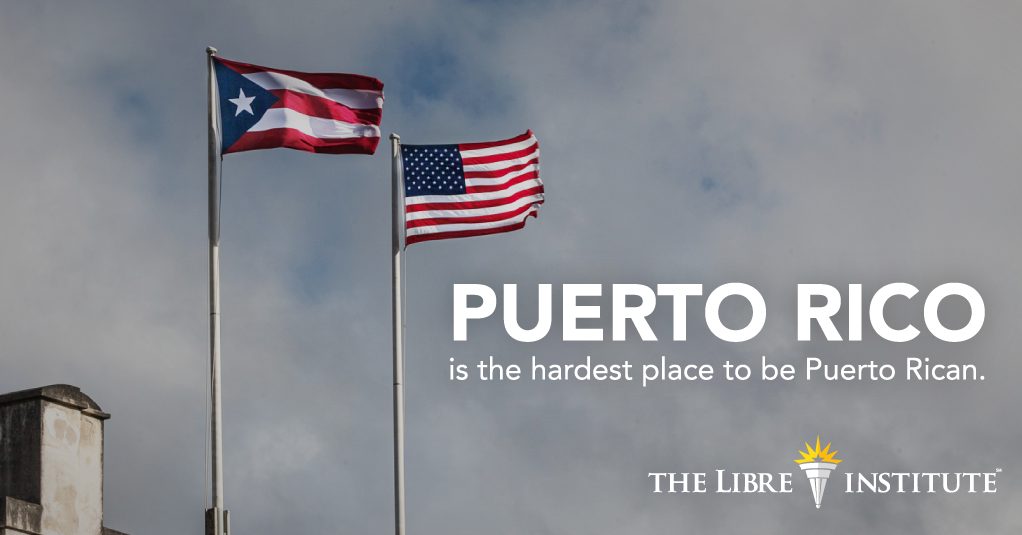 Imagine a beautiful island with friendly and welcoming inhabitants, a treasured and diverse culture, year-long tropical weather, and varied natural scenery ranging from striking deserts to rainforest preserves: la Isla del Encanto. Now imagine scenes of crushing poverty, staggering joblessness, and a mass exodus of tens of thousands of people fleeing the island for greener pastures every year. Welcome to the U.S. territory of Puerto Rico.

Puerto Rico is an island in crisis, with soaring debt, a broken economic system, and a population increasingly desperate to find opportunity elsewhere in the United States. Policymakers have disputed the causes of the crisis, with many claiming that it would go away if only Puerto Ricans had access to more government handouts. However, the experience of Puerto Ricans on the mainland tells a different story.

The inclusion of food stamps – a common form of welfare – in this comparison is important in the context of modern policy debates surrounding the proper solution to Puerto Rico’s low growth and consequent fiscal crisis. Leftist policymakers have repeatedly pointed fingers at the lack of expansion in Medicaid and other welfare programs as a key cause of the island’s problems. However, one pattern that emerges from these comparisons is the fact that Puerto Ricans tend to do better in jurisdictions with higher economic freedom – the freedom to choose how to produce, sell, and use your own resources, while respecting others’ rights to do the same. In measures such as government spending, taxation, and labor market freedom, states like Florida consistently rank among the most economically free in North America, which should be a wakeup call for the government in San Juan.

Thousands of Puerto Ricans have left their beloved island for the state of Florida in recent years, and that should be no surprise. Puerto Ricans in the Sunshine State enjoy higher levels of economic freedom than their counterparts on the island, which paves the way to higher incomes, lower poverty, less unemployment, higher life expectancy, improved environmental quality, and countless other benefits. The questions policymakers should ask are about the size of the public sector, excessive labor regulations, powerful unions, corporate welfare, pervasive cronyism, inappropriate levels of welfare, and legal barriers to trade. We should not be squabbling over how much more taxpayer money we should throw at a territorial government that has proven unwilling to expand economic freedom for its citizens.