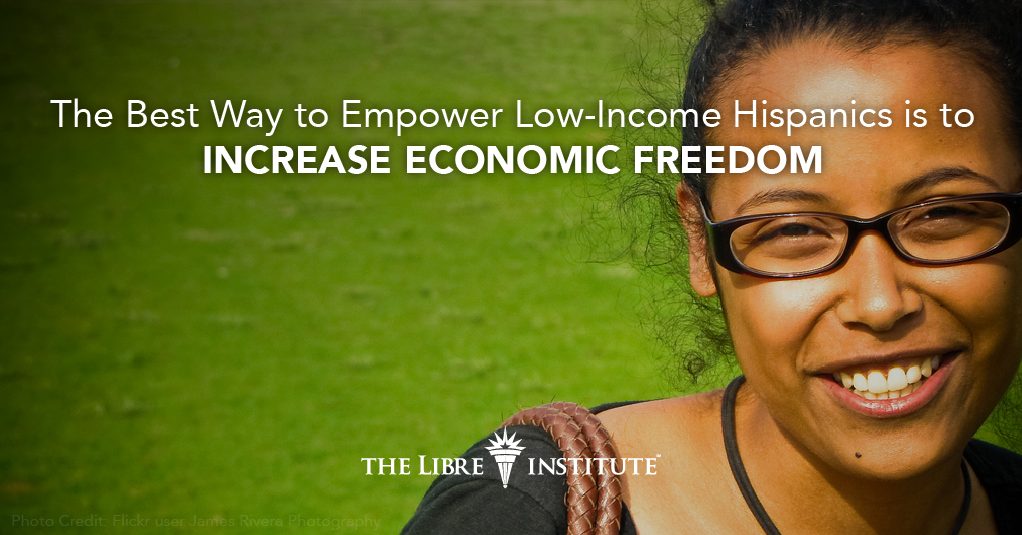 Over the last fifty years, the War on Poverty has failed to produce the much-desired outcome – but it isn’t for lack of funding. As noted by the National Center for Policy Analysis, the War on Poverty has cost Americans $22 trillion—three times what the government has spent on all wars in U.S. history. Looking at changes in poverty rates — especially in light of the enormous amount of spending dedicated to eradicating it — is useful to understand the effectiveness of anti-poverty programs.

The poverty rate of Hispanics in particular is near where it was 44 years ago (poverty among Hispanics, who can be of any race, was not measured until 1972) and it has never dropped below a 20 percent threshold. According to the latest U.S. Census Bureau figures, Hispanics in the U.S. hold the second highest poverty rate after African Americans. Given the poor record of accomplishment of government intervention in alleviating poverty, an important question remains: is there a better way to help the poor? The good news is that the answer to this question is a resounding ‘yes!’ The bad news is that the U.S. is moving away from it.

Evidence suggests that economic freedom positively correlates  with economic growth and higher incomes. Recent studies indicate that policies that limit the role of government in society and empower the individual hold the promise of decreasing poverty. As recently reported at Reason, a National Bureau of Economic Research study found that a one-point increase on the Fraser Economic Freedom of North America index is associated with about an $8,156 increase in real average market incomes.

Unfortunately, as highlighted by the Heritage Foundation’s 2016 Index of Economic Freedom, Americans continue to lose economic freedom. The report states:

“Following declines in seven of the past eight years, the United States this year has equaled its worst score ever in the Index of Economic Freedom. Ratings for labor freedom, business freedom, and fiscal freedom have flagged notably, and the regulatory burden is increasingly costly”.

And if these findings were not enough bad news for our country’s poor – and ultimately for all Americans – there is another reason why losing economic freedom should have us worried. A study in the journal Contemporary Economic Policy shows that that reducing economic freedom tends to increase income inequality.  But the tragedy in all of this is that measures such as raising the minimum wage are often hailed as the cure for income inequality when in reality these approaches only exacerbate the problem by leading to less economic freedom. In fact, as the Fraser Institute explains in their latest report on economic freedom in North America:

“High minimum wages restrict the ability of employees and employers to negotiate contracts to their liking. In particular, minimum wage legislation restricts the ability of low-skilled workers and new entrants to the workforce to negotiate for employment they might otherwise accept and, thus, restricts the economic freedom of these workers and the employers who might have hired them”.

As policymakers look for ways to reduce the number of Americans living in poverty, they must also pay serious attention to America’s slipping economic freedom. Economic freedom is the necessary condition for prosperity to reach all Americans. Without it, not only there is little hope that we are ever going to be able to help our poor, but there is also a higher probability that some lawmakers will look to policies that actually exacerbate the problem in order to repair the damage done by its absence.