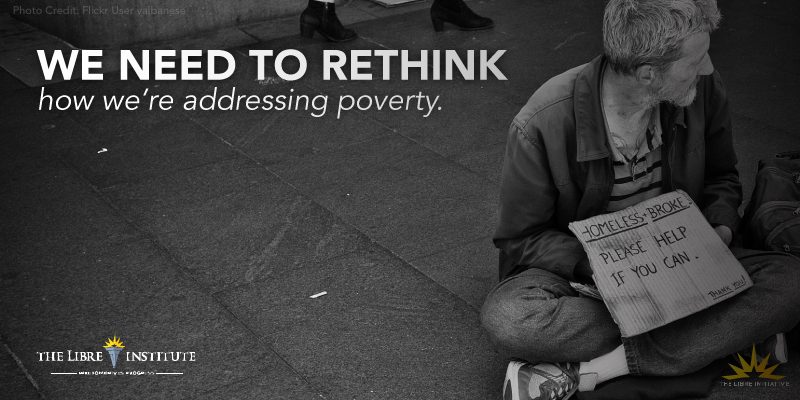 Time and again, politicians in Washington have a habit of falling into a familiar trap: if at first you don’t succeed… just throw more money at the problem.  The so-called ‘War on Poverty,’ first declared by Lyndon B. Johnson in 1964, is a textbook example.

It seems that regardless of whether their efforts succeed or fail, the answer is always to raise taxes, spend more money, and create more – often redundant — government programs.  Even after hundreds of billions of dollars have been spent, more than one in five U.S. Hispanics currently live in poverty, and the situation shows no signs of improving.  In the graph below, we examine trends in federal welfare spending and Hispanic poverty rates from 1972 to the present, using data from the Federal Reserve and the U.S. Census Bureau. The yellow line depicts the level of income security spending by the federal government in welfare and social services, in billions of dollars, from 1972 to 2014.  The white line represents the percentage of the U.S. Hispanic population under the poverty line over the same period.  Even as federal spending on poverty alleviation has ballooned nearly twentyfold, Hispanic poverty rates have remained roughly the same, hovering between 20 and 30 percent over the last four decades.

The fact that poverty rates are so unresponsive to spending increases should serve as a strong signal to policymakers that structural causes are to blame.  The United States is far from a free market, and the welfare state is nothing more than a Band-Aid covering a more fundamental underlying problem.  Our economy suffers under one of the most burdensome regulatory regimes in the developed world, permanently impeding the ability of American companies to hire workers, innovate, and adapt in the face of change.  Restrictive minimum wage laws, labor regulations, and insurance mandates have reduced employment opportunities for the lowest skilled workers and forced untold thousands into part time jobs involuntarily.  Labyrinthine mandates and controls on health care have inflated the cost of insurance and made it ever more costly for low-income workers to address healthcare needs; one of the leading causes of poverty in the United States.

These are all serious problems that need to be addressed, and the data show that throwing more money at the problem is not having the intended effect – if anything, it is exacerbating the problem.  Central planners do not know how to address the diverse needs of the poor in a sustainable way, and people continue to be forced into poverty as a result of a lack of economic freedom in the economy.  Instead of lifting people out of poverty, federal welfare spending has continued to grow year after year with no observable effect.  In order to tackle the problem at its root, policymakers must address the structural issues that have made it so difficult to climb out of poverty and improve economic freedom so that people at the bottom rungs of the market have the ability to create value for others and climb the socioeconomic ladder.