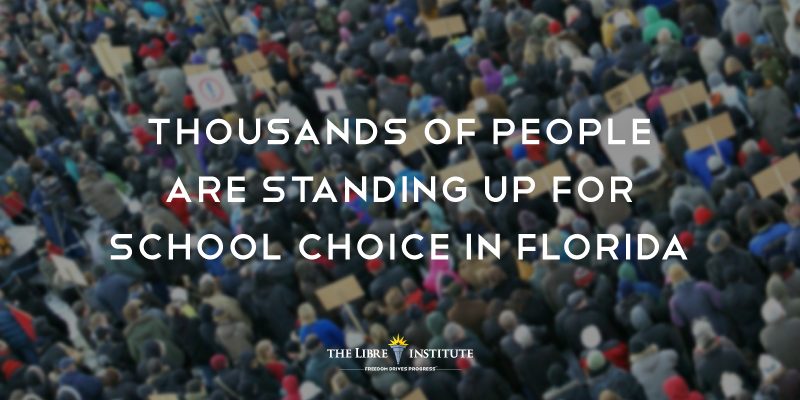 In a major demonstration tomorrow in Tallahassee, thousands of parents, students, teachers, activists, and faith leaders are expected to rally in protest of a controversial lawsuit targeting Florida’s private school voucher program, which provides scholarships to children from low-income families.  The event will be headlined by civil rights leader Martin Luther King III, occurring the day after the national holiday named for his father.  Hispanic faith leaders have joined his call to oppose the lawsuit, brought on by Florida’s largest teachers union, saying it would be a tragedy if it succeeds.

The lawsuit was filed in 2014 by the Florida Educational Association on the grounds that the program violated the Florida constitution, alleging that it redirects taxpayer money to religious and sectarian schools.  The program is funded by donations from corporations in the state in exchange for dollar-for-dollar tax credits, covering up to 100% of a company’s state income tax liability.  In May, the union lawsuit was dismissed by a judge on the grounds that the program was not funded by the state of Florida, and therefore the plaintiffs lacked ‘taxpayer standing’ in the case.  Nevertheless, the union has decided to pursue the case by appealing the judge’s decision.

Florida’s private school voucher program is the largest in the nation, and serves nearly 78,000 low-income students, of whom roughly 38% are Hispanic.

U.S. Hispanics overwhelmingly support school choice, and the widespread public backlash by the Hispanic community against the lawsuit should come as no surprise.  Last Tuesday, Hispanic pastors from across the state announced a coalition of over 100 faith leaders, backed by the Hispanic Council for Reform and Educational Options, who will stand against the lawsuit.  Nino Gonzalez, superintendent of the Florida Multicultural District of the Assemblies of God, said the lawsuit could potentially limit opportunity for Florida’s low-income students.

“I support school choice because it has given communities the opportunity to create schools that work for their community,” he said during a press conference. “There are no good reasons for this lawsuit,” he added, “but what a tragedy if it succeeds.”

In 2010, over 5,000 people marched in Tallahassee in what was then the largest rally to date to support the school choice program.  Next week’s protests near the state capitol are expected to draw similarly impressive crowds.

According to Denise Vega, a leader in the children’s ministry at Iglesia el Calvario of Orlando, school choice has had a tremendous personal impact for Hispanic families and children who otherwise would not have the opportunity to get a good education.

“This scholarship has been a blessing to our children and our families,” Vega said. “School choice should be accessible to everyone. They should drop the suit.”