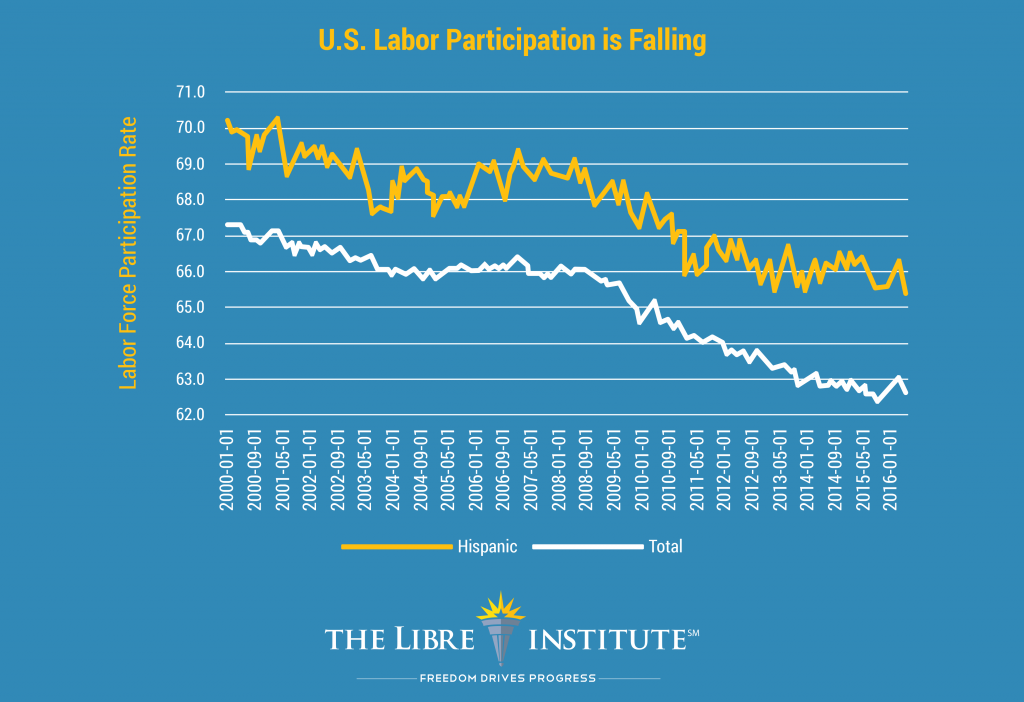 The latest jobs numbers are in, and the Obama administration is hardly ending on a high note. On the contrary, the economy’s performance under the Obama administration has been underwhelming. Employment has been slow to recover to pre-recession levels, and the nation’s economy continues to limp along at an anemic rate of growth that all-but-ensures we’ll fall behind the GDP of China in just a few years’ time. At the same time, another disturbing trend has been emerging in the U.S. economy – a trend which has the potential to cause much more serious structural problems. For the last sixteen years, the labor force participation rate – which reflects the percentage of the population that is either working or looking for work – has been falling steadily. U.S. Hispanics, who have consistently demonstrated higher rates of labor participation than other demographic groups, are dropping out of the labor force as well, with potentially serious consequences. Low labor force participation rates can have serious consequences for the fiscal health of a nation, and can drive governments closer to bankruptcy. The U.S. territory of Puerto Rico, for example, is teetering on the brink of fiscal ruin due to mounting debts caused – in part – by policies that have shrunk the island’s labor force. In recent years, the share of the Puerto Rican population actually participating in the labor force has shrunk to an astonishing 40 percent. According to Adam Millsap of the Mercatus Center, this has eviscerated the Puerto Rican tax base:

“A government requires taxes in order to provide services, and taxes are primarily collected from people who work in the regular economy via income taxes. A small labor force with relatively few employed workers makes it difficult for a county to raises taxes to provide services and pay off debt.”

With such a small portion working and paying taxes to support the rest, a fiscal crisis like the one currently racking the island was practically inevitable. The fact that the U.S. mainland – in terms of both spending and labor participation – is trending in the same direction is troubling, and calls for a close investigation of public policies that might cause the entire United States to go the way of Puerto Rico.

Critics have argued that most of this decline is natural and to be expected, given the retirement of the Baby Boomer generation, among other demographic factors. However, according to James Sherk of the Heritage Foundation, an aging population alone does not explain this decline:

High minimum wages prohibit some workers from working. High taxes make it harder for employers to hire. High welfare spending subsidizes non-participation in the labor force. Excessive regulation of the labor market limits options for employers and make it costlier to hire new workers. All are contributing to the falling labor force participation rate in the United States, and the parallel decline of the Hispanic labor force participation rate should give policymakers pause. Hispanics have traditionally shown significantly higher rates of labor force participation than the general population. The fact that Hispanics are starting to drop out of the labor force is a worrying signal that the U.S. economy is headed for continued decline. The left is perfectly free to bury its head in the sand and pretend that America’s dwindling labor force is just a product of our aging population, but the evidence is piling up against them. Lawmakers across the board, however, cannot afford to ignore reality any longer.