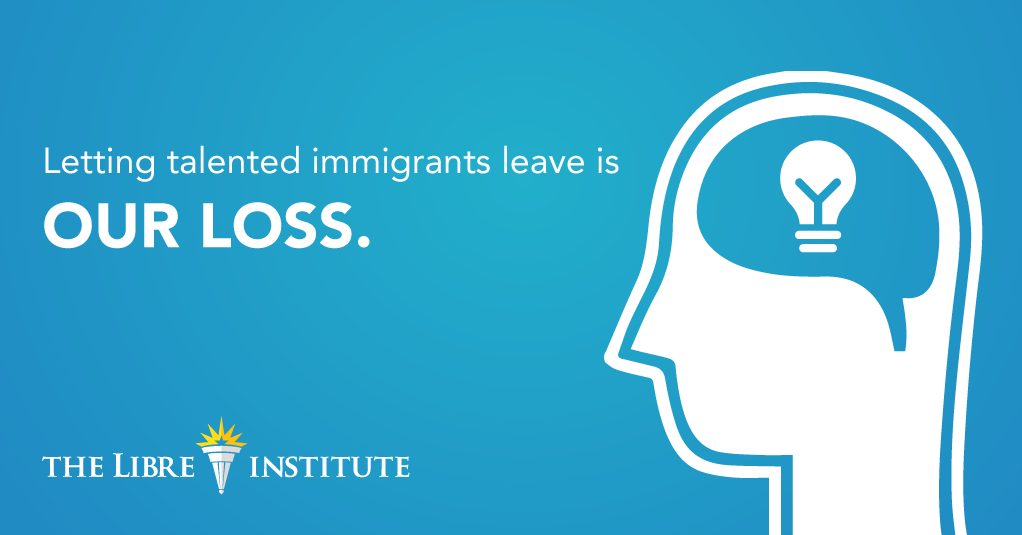 Those who try to convince us that immigration is a zero-sum game have polarized the immigration policy debate, framing the issue as if every immigrant who comes to the U.S. takes something that does not belong to them. Nothing could be further from the truth. Sadly, dismissing the real economic gains from immigration has become almost a sport among those asking for your votes. In this political environment, slogans such as “send them back” stoke people’s fears about immigration. Luckily, a recent study demonstrates the fallacies of this view and the absurdity of immigration policies geared more towards making immigrants go back instead of staying in the United States. Policymakers should take heed: letting talented immigrants leave is our loss.

Americans should be proud that our country is home to many of the world’s top universities, and unsurprisingly, the best and brightest from across the globe travel to the U.S. to attend our colleges. Traditionally, Asian nations have dominated the landscape of F-1 visa holders – who attend these colleges – and they still do. But a new trend is emerging that could boost Hispanic representation among international students. According to the 2015 Open Doors Report on International Educational Exchange – an annual survey from the Institute of International Education in partnership with the U.S. Department of State’s Bureau of Educational and Cultural Affairs – Latin America and the Caribbean were the fastest-growing regions of origin for international students in the U.S. in 2014-2015. As highlighted by Kelly Mae Ross at U.S. News, the number of students from Latin America and the Caribbean increased more than 19 percent from last year, to reach 86,378 — nearly 9 percent of international students in the U.S.

According to a recent study by professor Giovanni Peri, chair of the department of Economics at University of California, Davis, one half of all advanced STEM degrees in the U.S. are awarded to foreign students. As highlighted in the study, the U.S. issued 600,000 new F-1 student visas in 2014, up from only 110,000 in 2001—more than quintupling in 14 years. Normally, college-educated workers, both natives and foreign, are a boon to the local economies. As highlighted in Peri’s study, they positively affect the productivity and average wages of a city. In fact, what the study finds out is that, “when foreign-born students are able to find work in local economies after graduation, the positive economic effects extend beyond their incomes, especially since many pursue degrees in sought-after science, technology, engineering, and mathematics (STEM) fields.”

However, the temporary nature of the F-1 Visas means that international students often cannot stay and work in the U.S. after completing their studies. So what happens when these students get their degrees and go back to their home countries? The short answer is: nothing good—for us at least. While these students might go back and enjoy the benefits of American higher educational in their native countries, we have lost our investment. As Peri’s study explains:

“The economic impact of this lost human capital is perhaps best understood in terms of lost wages and taxes in state and local economies. 27 The 10 states with the most F-1 visa holders stand to gain nearly $8.3 billion in wages and $283 million in state taxes. Among the 10 states with the most undocumented students, those numbers are $1.5 billion and $40 million. For example, California’s annual wage loss associated with the low retention of F-1 students is approximately $2 billion; for New York, the number is $1.6 billion.”

Put simply, when we allow F-1 visa holders to leave, we lose money. We all do. At a time when most local economies struggle to find revenue to finance a variety of government services, and our national debt is approaching $20 trillion, immigrants who come to this country to study should be seen as a precious resource to develop and retain.

On the one hand, there is a pragmatic reason why all Americans should embrace immigrants. Given the considerable amount of revenues F-1 visa holders can bring to states, of the likelihood of needing to raise taxes even higher in the future is reduced. On the other hand, there is also a moral reason to embrace immigrants. We are a nation built upon the variety of ideas that a variety of individuals brings to the table, and now more than ever we need that spirit.

What the study shows is the undeniable link between allowing people the opportunity to prosper wherever they see fit, and the resulting economic prosperity that this brings to everyone else around them. When a society is free, it embraces talent regardless of country of origin and seeks to leverage it for the benefit of all. Most importantly, next time someone tries to convince us that sending immigrants back to their country is good public policy, we should be ready to reach for our wallet. Somewhere down the line we will all pay for it.