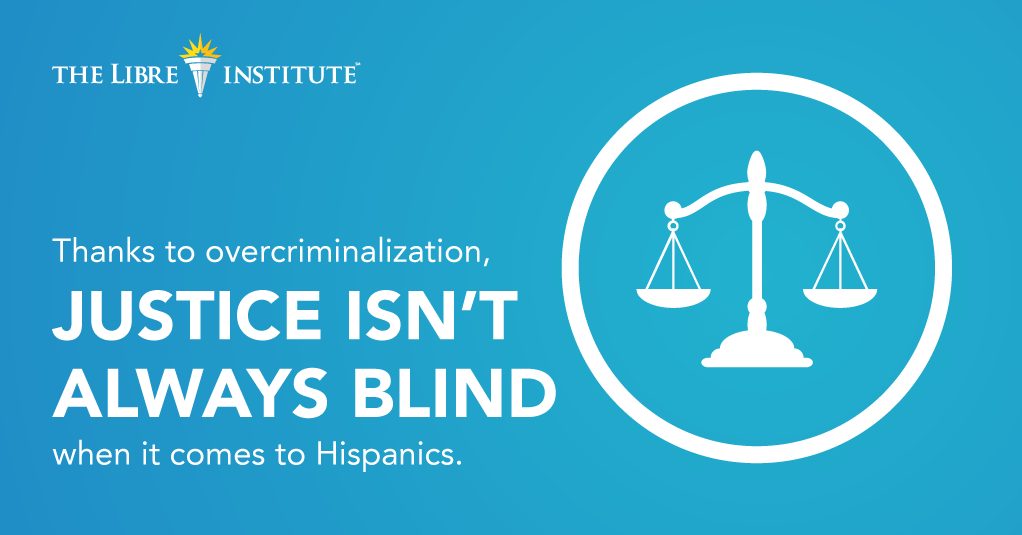 In many states across the country, courts are unable to provide public defenders and translators for defendants who can’t afford their own, according to recent research by Pew Charitable Trusts. Their findings highlight the negative consequences of over-criminalization, which has made so many petty civil violations into criminal offenses that the criminal justice system is being stretched to its limits. As we pile more and more tasks onto the government, the government is increasingly unable to fulfill its basic priorities. Making matters worse, U.S. Hispanics are bearing the brunt of this increasing inequality in the justice system, and face serious barriers to opportunity that can last a lifetime as a result.

The burden of over-criminalization has pushed our criminal justice system beyond its limits. In recent years, many infractions have been elevated from civil penalties to criminal penalties that caseloads now exceed the recommended maximum for in courts and police departments across the country. One of the negative consequences of shifting many costly responsibilities onto governments is that it makes it harder for them to fulfil their other core obligations under the law, such as the responsibility to provide public defenders or court translators. In the United States over 56,000 people are charged with felonies every year. Out of those, 80 percent are so poor they must resort to publicly appointed attorneys who – in some states – are able to work less than one hour per case.

The Hispanic median income in the United States is less than the national average, making this community more likely to require the assistance of public defenders. Making matters worse, the lack of court-provided interpreters has a disproportionate impact on Spanish speakers with low English proficiency, and could open up the door to miscommunications and miscarriages of justice. If the court can’t afford one or the other, many Hispanics may be out of luck.

The collateral consequences of having a criminal record create significant barriers to opportunity. These consequences often persist long after individuals have served their time, paid their fines, or otherwise repaid their debt to society.

According to Carlos Martínez, who is the head of the Miami-Dade County Public Defender’s Office, indigent defendants often go to trial without a lawyer and suffer legal consequences that can last a lifetime. “People are getting convictions without an attorney and ruining their lives because they can’t get jobs,” Martínez said.

Over-criminalization is no small matter. In order to address the issue at its roots, policymakers have to undertake a serious rollback of the criminal code. Since 2000, Congress has created an average of 56 new crimes every year, and there are already an estimated 300,000 regulations on the books that carry criminal penalties. As a result, courts and police departments around the country are pushed to the breaking point, making them unable to fulfil their basic obligations. This stretching of resources has disproportionately impacted the Hispanic community, and needs to be reversed immediately.