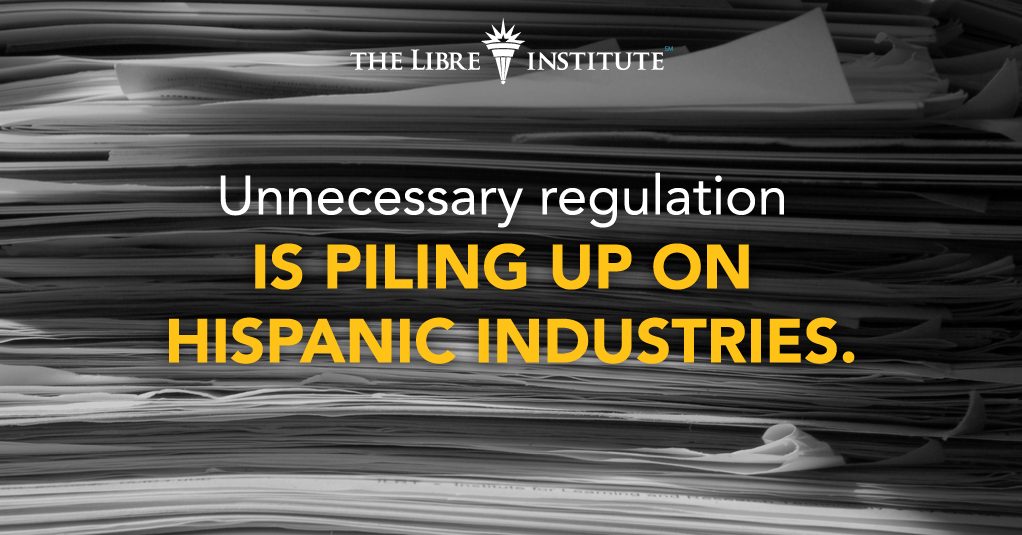 At first glance, it seems that there are some in Washington who want to cut red tape and ease the regulatory burden on businesses, while others want closer scrutiny and oversight from regulators.  However, a closer look at the data reveals an altogether different picture: no matter who is in charge, regulations just keep piling up.

The following graph from The LIBRE Institute compares the increase in regulatory restrictions on five industries that employ higher than average percentages of Hispanic workers.  This comparison reveals a sustained and significant increase in regulations over most of the period.  Unnecessary regulation reduces economic freedom, lowers productivity, and ultimately holds down wages. If policymakers wish to improve wage growth in the Hispanic community, they should look to alleviate the burden of unnecessary regulations that hold back productivity in industries that employ Latinos.

Using conventional methods, it is often difficult to measure the true extent of the American regulatory regime, which is thought to be one of the most burdensome and complicated in the developed world.  The regulatory code is thousands upon thousands of pages in length, containing an almost immeasurable number of restrictions, conditions, requirements, and specifications on every industry in the United States. However, it is possible to estimate the number of such restrictions that appear in the code in a consistent manner with a digital tool from the Mercatus Center at George Mason University: RegData.

As explained by Antony Davies of the Mercatus Center, RegData is “a text analysis tool that counts the number of binding words—“shall,” “must,” “may not,” “prohibited,” and “required”—that appear in the Code of Federal Regulations and cross-references those word counts with the industries to which they apply.”  By using RegData to graph the increases in the number of such restrictions on agriculture, accommodation and food services, construction, administrative and support, and food manufacturing – all of which employ  high levels of Hispanic workers – we can measure the disproportionate impact that the increase in regulatory burdens has on Latinos in particular.

In each industry selected for this comparison, regulations have increased significantly from 1997 to 2012.  Two industries – Administrative, Support, and Waste Management, and the Food Manufacturing industry – experienced brief periods of deregulation in the late 1990’s, but picked back up and followed the general upward trend shortly after.  The greatest increase was in the agricultural sector, which experienced a 79% increase in binding regulatory requirements over the period.  Taken together, while these five sectors represent only a fraction of the total Hispanic labor force in the United States, they serve as a snapshot of the overall upward trend in regulatory requirements that have burdened the U.S. economy across a broad range of industries.

According to a report by the Mercatus Center, increased regulation may seriously reduce productivity in the industries it affects:

Given that rising productivity per person is one of the chief drivers of increased wages and salaries, policymakers should reduce the burden of overregulation on American businesses in order to boost incomes.  Over the past 10 years, no matter which party controls the government, Hispanic wages have stagnated, while regulations have only continued to add up. In fact, the cost imposed by regulations on the U.S. economy has increased by $73 billion a year under Obama. In order to remedy the problem, policymakers must seriously consider pragmatic regulatory reforms in order to get wage growth back on track.  The U.S. Hispanic community – and the country overall – deserves nothing less.