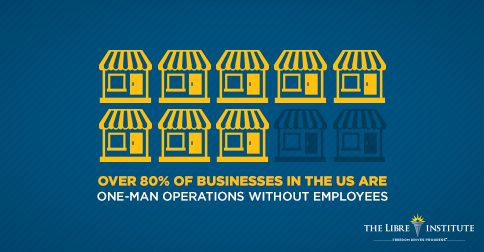 Businesses are typically thought of as being massive, impersonal, bureaucratic behemoths in popular culture.  The archetype of a modern office space in a skyscraper, with hundreds of employees in shirts and ties, typing away in cubicles, tends to dominate perceptions of American companies.  In reality, the American business landscape is dominated by individual enterprises with no paid employees, which contribute billions of dollars to the economy.  Hispanics lead the way in this form of entrepreneurship, and in a new graphic from The LIBRE Institute, rates of individual enterprise in the Hispanic population are contrasted with those in the non-Hispanic population to highlight this unique attribute of the Hispanic entrepreneurial community.

For some critics of the free market, it is easy to demean the concerns of businessmen and women by claiming corporations are not people.  It is easy to smear them as impersonal; without concerns, voices, or human faces.  In contrast, the idea of a lone entrepreneur running their own small business out of their home is much more human.  But in a very literal way, these corporations are people: most businesses are just one person, and for Hispanics, this is especially true.  Using Census data from the Survey of Business Owners, rates of self-employment of Hispanics in businesses without paid employees are compared with rates among non-Hispanics, revealing striking results.  While approximately four in five non-Hispanic businesses are one-man operations, approximately nine out of ten Hispanic businesses fit that description. U.S. Hispanics lead the nation in this kind of individual enterprise, which is consistent with other findings on Hispanic entrepreneurialism, such as the fact that Hispanics start businesses at a much higher rate than the national average.  New business formation is a critical component of economic growth, and a majority of businesses do not start with a whole team of staff already there.  More often, an entrepreneur has an idea to create value for others, and implements it themselves, taking great risk on themselves in the process.  For example, a bakery business operating in all 50 states might have its origins in a man’s home kitchen.  If his relatives told him every year at Christmas that they enjoy the cakes he sends out to his family for the holidays, he might have enough confidence in that information to risk investing a few thousand dollars in an industrial oven that he could use to produce hundreds of cakes.  If his sales are high enough, then his one-man operation could produce enough profit to invest in even more ovens, rent a storefront, or even hire employees.  Countless millions of businesses in the United States got their start from humble beginnings just like this, with the individual entrepreneur at the root of it all.

Though Hispanics lead the nation in one-man operations, they are also creating jobs at an astounding rate.  From 2007 to 2012, the number of non-Hispanic businesses with paid employees remained about the same, increasing only by 0.2% over the five year period.  For Hispanics, on the other hand, the growth was dramatic.  The number of Hispanic-owned businesses with paid employees increased by 17.1% over the same time frame, increasing from less than 250,000 in 2007 to nearly 300,000 in 2012.  In 2015, Hispanic-owned businesses overall contribute an estimated $661 billion to the U.S. economy, an increase of 88% since 2007.

Hispanic entrepreneurs are a driving force behind American economic growth, and will continue to grow in the future.  While growth in non-Hispanic businesses has nearly stagnated, Hispanics are leading the way in the creation of new businesses.  While the majority of businesses in America are one-man operations, most businesses with paid employees get their start this way.  As the data show, Hispanic owned businesses are creating jobs at a dramatic pace, and will contribute more than half a trillion dollars to our economy this year.  U.S. Hispanics are a vital part of our free market economy, and are growing the pie and creating opportunity for all.